Funny / Back to the Future 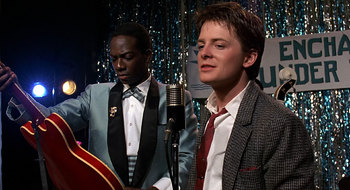 "I guess you guys aren't ready for that yet... but, your kids are gonna love it."
Advertisement:

As the quintessential Fish out of Temporal Water franchise, Back to the Future exploits the trope to its most humorous extents.

Works with their own pages:
open/close all folders
Part I
The Animated Series
Advertisement:
IDW comics
Other