Pinball / Back to the Future 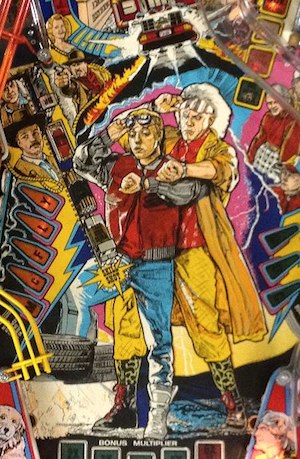 The Other Marty, and it's not Eric Stoltz this time.
"Roads? Where we're going we don't need...roads."
Advertisement:

Back To The Future is an arcade pinball game designed by Ed Cebula and Joe Kaminkow. it was released in 1990 by Data East Pinball, and is based on the Back to the Future film trilogy.

The Back To The Future playfield is divided chronologically, with Hill Valley of 1885 on the left and the Hill Valley of 2015 on the right. While the player tries to raise his score by going between the past, the future, Biff's casino, and the clock tower, caught in the middle are the DeLorean, Doc Brown, and Marty (notably not played by Michael J. Fox).

Not to be confused with the Digital Pinball Table by Zen Studios (as part of Zen Pinball), which has its own page.

"Your future is whatever you make it! So make it a good one!"