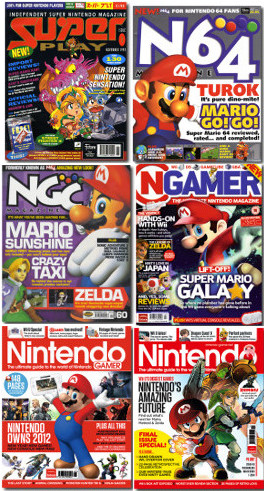 was a third-party Nintendo-focused magazine, published in the United Kingdom and Ireland and translated for distribution in Spain, France, The Netherlands and Brazil.

The magazine began publication in the early 90's as Super Play, which focused on the Super NES and Game Boy. When the launch of the Nintendo 64 was imminent, the name changed to N64 Magazine, and when the Nintendo GameCube and Game Boy Advance were approaching release, it changed again into NGC Magazine. The name NGamer was adopted shortly before the launch of the Wii, and remained until the January 2012 issue when it was renamed Nintendo Gamer. The magazine was published 13 times per year at 4-week intervals, assigning one issue to each month, then releasing the remaining one for Christmas. The staff work at Future Publishing UK, which since 2003 has also been the home of the UK Official Nintendo Magazine ever since Nintendo stopped publishing it themselves.

The magazine was by far the longest-running unofficial UK publication that focuses primarily on Nintendo, surviving through a combination of market niches and high-quality writing. Ever since their inception, the magazine has had a high focus on import games (at least half of which never reach the British market, although they give a re-review and score if/when it becomes available locally), has consistently written news and reviews with a density of snark and honesty almost never seen in their market (made possible because they don't have to tote the company line), frequently features bizzare ideas for 'feature articles' and 'characters' to add to their aesthetic, and seems to consistently hire individuals who can combine quality work/writing with British humour. It is for this reason that their fanbase has become so tenacious without becoming unpleasable, staying with them despite their routine name/design/staff overhauls and the state of Nintendo's games market share. However, these defining traits seem to have diminished over time. The announcement that the magazine had been cancelled was made in August 2012, although it still continued online until early 2013.

In addition to that, one of the forum's users created a webforum, GNamer Forum

, partly devoted to carrying on the spirit of the magazine.

The following tropes apply to the entire line of magazines, unless stated otherwise.