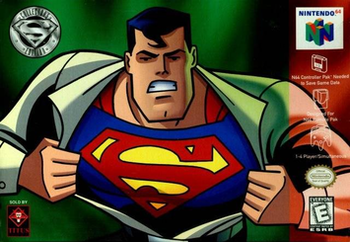 Enjoy this N64 Superman box art.
In short time your fate will be sealed, Superman.
Advertisement:

Superman (or The New Superman Aventures [sic]note although, the word is correct... in French), unofficially referred to as Superman 64, is a video game based on Superman: The Animated Series and released by Titus Software on May 31, 1999 on the Nintendo 64.

Lex Luthor creates a virtual version of Metropolis and then succeeds in trapping Lois Lane, Jimmy Olsen, and Professor Emil Hamilton within it. Superman is forced to enter Luthor's virtual world and SOLVE HIS MAZE. Other villains in the game include Parasite and Brainiac.

The player assumes the role of Superman and is challenged to complete puzzle obstacles throughout the game; usually levels contain similar challenges. In many levels, Superman flies through a series of rings within a time limit (unless the player chooses to play the game on an easy difficulty; the rings then disappear but the timer remains the same). The "virtual Metropolis" is filled with what the developers called "Kryptonite fog" (which was actually the game's inability to render anything more than 10 feet away without being choppier than it already is), supposedly there to slow him down. Other levels feature Superman moving through buildings fighting various enemies and going out of his way to protect the virtual world's inhabitants. Oh, and every ring-based level is a Timed Mission and at least one puzzle in every single level is timed too.

If you want to save your friends, read my tropes!

AVGN says the upcoming boss fight will be epic despite how bad the game is. He is immediately proven wrong.

AVGN says the upcoming boss fight will be epic despite how bad the game is. He is immediately proven wrong.