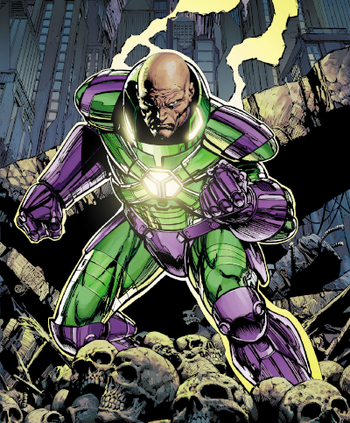 If there was ever a job for Superman... this is it.

"I'm the only sane inmate of Asylum Earth. I'm not eager to hand tomorrow over to an interplanetary extremist with laser eyes. There's only room on this world for one leader, Superman. When I'm finished with you, every last gibbon out there will know you for the menace you are... and they'll realize that Lex Luthor is their savior."

Luthor has had various hats over the years. He was originally portrayed as a red-headed war profiteer who aimed to Take Over the World by playing various political factions against each other. He was then reimagined as a bald, egomaniacal Mad Scientist after an illustrator confused him with the Ultra-Humanite. This conception of the character stuck, and for the remainder of the Silver Age and the Bronze Age of comics, Luthor was written as a Card-Carrying Villain who used his technological prowess to match Superman's physical might, regularly allying with other villains, like Brainiac, Bizarro, and The Joker in order to vex the Man of Steel and his allies. One thing that did change about Luthor was that as time went by, he became progressively younger and more physically active. The paunchy man in his fifties was replaced by an exceptionally fit man in his forties, and was then retconned again into being only a few years older than Superman and possessed of a warsuit that allowed him to fight the Kryptonian hand-to-hand. He also gained his own supporting cast, including his sister and Morality Pet, Lena, and the planet of Lexor, which hailed him as a hero after he saved it from destruction, and a number of alternate universe doppelgangers, including Alexei Luthor of Earth-2 (based on his original, Golden Age appearance) and the heroic Alexander Luthor Sr. of Earth-3. This version of Luthor, along with the rest of the existing DC Universe, was erased from continuity following the Crisis on Infinite Earths.

He has since gone back and forth in terms of characterization, at times the CEO of LexCorp, at times a Mad Scientist, at times a classic Diabolical Mastermind, and sometimes a combination of all three. He has faked his own death, and impersonated his supposed son, revealed himself as one of Superboy's genetic donors, and met Death. He's been the mastermind of numerous plots against the heroes of Earth, a participant in General Lane's genocide of New Krypton, and briefly, President of the United States of America, helping codify the President Evil trope in the process. He's even starred in his own spinoffs, serving as the Villain Protagonist in Lex Luthor: Man of Steel, the "Black Ring" story arc in Action Comics, and Forever Evil (2013). In any incarnation, Luthor is driven by his burning hatred of Superman (not unlike Doctor Doom and Reed Richards), which is frequently put down to envy over the fact that, no matter how rich Luthor becomes, no matter how much political power he attains, and no matter how hard he schemes, he will never, ever be Superman. His current characterization is a balanced medium between all his incarnations: he is the ruthless and savvy corporate executive, the formidably brilliant mad scientist and the egomaniac conqueror in equal measure. This makes him one of the more complex and multifaceted villains in all of comics, which helps cement his enduring popularity.

A-F
Lex Luthor: "You've made a mistake, Superman. A big mistake. A potentially fatal mistake. I run this town, Superman. Metropolis belongs to me. The people are mine, to nurture, or destroy, as I see fit. And they've forgotten that. They've looked at you, with your costume, and your flashy superhuman powers... and they've forgotten who their master is. Who is number one! And I intend to remind them, Superman. I'm going to show them you're nothing, Superman. A cardboard cut-out. One day, very soon now, you're going to die, Superman. You're going to be destroyed and you'll know who's doing it. Everyone in Metropolis will know. But no one will ever be able to prove it. I'll not be arrested, Superman. Not ever again. Remember, Superman. You're a dead man. It's just a question of how soon!"
G-L
Lex Luthor: Ha, ha! Shoot, you fools! I'm invulnerable! Those bullets don't even tickle me!
M-R
S-Z