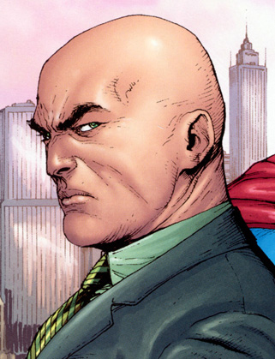 "I raise my voice, and Satan himself is on bended knee. I am the leader of the free world, you impotent little psychotic. I've had the most powerful beings on this or any planet gunning for me for years, and you think you're going to scare me?"
Advertisement:

Diabolical Mastermind, Mad Scientist, LexCorp CEO, President of the United States. The Super Villain — or so say my detractors.

While I do not enjoy sharing the personal details of my life, I find it wise to keep my fan base happy (that clown's bragging about having a page before me was... unappreciated) so I will indulge you. At the minimum, I deserve a page before that alien with the yellow ring.

My name is Alexander Joseph Luthor. You may address me as "Lex" or preferably as "Mr. Luthor", or "Mr. President", depending on whether or not I am currently president, as I was from Lex 2000 #1 to the Superman/Batman series, just anything but "Lexy". That clown wouldn't shut up about that name. From my humble beginnings in Action Comics #23 (April, 1940), I have been portrayed as almost everything between a Mad Scientist and a rather upscale white-collar criminal, a maniacal villain to an abused child, courtesy of my evil, sadistic, backstabbing, manipulating lunatic of an excuse for a father, Lionel Luthor. I have been married eight times; the first seven don't count, and the last one I ended by blowing up my wife.

At least two of my children have been killed: Lex Luthor Jr. and his mother, Ardora, when their planet was destroyed, and Jerry White, of whose parentage I was not aware until his death. The only ones of my blood who have lived are Lena (whereabouts unknown), daughter of Contessa, my last wife; and Conner Kent, who is (biologically) my son with Superman (Spare me the "clever" remarks, please.) Conner is the only one for whom I have truly cared as a father, though only a clone made using my DNA and that of the Man of Steel. Unfortunately, he has turned from me to the path of the "hero".

Speaking of heroes, I'm sure you're aware that my arch-nemesis is Superman, whom I refer to on this page below as "the alien". Our relationship is... complicated and my feelings for him are mixed. I do find him annoying, but it is difficult not to admire him — even when he destroys one of my creations that was not meant to garner his attentions. And That's Terrible.

Several actors have portrayed me in movies and on television, and while many were adequate, none truly ever captured my essence. How could they? Nevertheless, Gene Hackman and Kevin Spacey provided admirable performances, highlighting my under-appreciated comical side. Michael Rosenbaum brought a notable charm in portraying my younger years, and John Shea's portrayal was sufficient. Clancy Brown was quite impressive in several animated portrayals (you may even be imagining his voice while reading this). Esteban Garcia dubbed me into Latin American Spanish 23 times and counting, though he was hardly the only one to do so. And my most recent portrayal by Jesse Eisenberg was… original. And let's not forget Jon Cryer, who previously played my annoying nephew, a huge comic book fan who demonstrated his impeccable taste in his eagerness to portray me.

For a more banal biography of my life, achievements, and, yes, setbacks, see Lex Luthor.

My appearances throughout history:

Tropes that apply to my person: