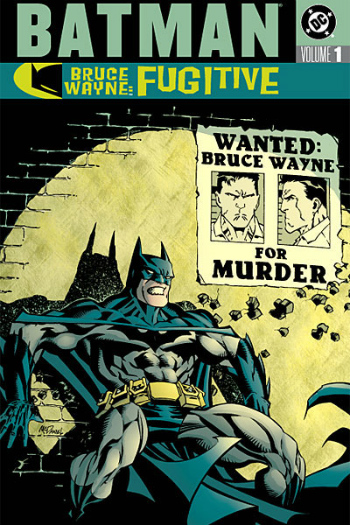 Bruce Wayne: Fugitive is a storyline that ran through the Batman titles in 2002.

After the events of Batman: No Man's Land and Officer Down, it seemed that things were looking up for Bruce Wayne, especially as he was starting to rekindle his romance with Vesper Fairchild, a radio personality who broke it off with Bruce prior to NML. However, things quickly fell apart as Bruce would find Vesper dead in Wayne Manor with him as the main suspect. Even worse, the Bat-family has found evidence that Vesper discovered Bruce's identity and he killed her to preserve it. However, it seems that Bruce won't have any of that and is dedicating himself to being Batman 24/7 after escaping prison. Can the Bat-family figure out the truth of Vesper's death and if they can, can they convince Bruce to come back?

Bruce Wayne: Fugitive started out in a special one-shot called Batman: The 10-Cent Adventure, which was Exactly What It Says on the Tin - a 10-cent comic book - before starting the storyline properly with Bruce Wayne: Murderer?. Bruce Wayne: Fugitive began with Batman #600 and, despite the event running for five months through the various Bat-titles, a few of them actually skipped around as only a handful of stories focused on the crime being solved.

The storyline was collected soon after in three volumes, all under the banner Bruce Wayne: Fugitive.