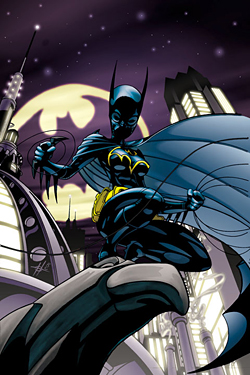 There's a new bat in town... and she's trouble.
Advertisement:

Batgirl, a DC Comics monthly series published from 2000-2006, was the first ongoing series to star the character Batgirl, who had existed in the comics continuity since 1967. The starring character was Cassandra Cain, the second woman to hold the Batgirl mantle, which she assumed in the Bat Family Crossover Batman: No Man's Land.note It should be mentioned that the unofficial second Batgirl (Helena Bertinelli, AKA Huntress) only had that identity for No Man's Land, and Cassandra may have been created simply to have someone wearing the second Batgirl's costume. According to Scott Peterson, who came up with the basic concept for Cassandra, he was told by his boss, after Oracle was established, "Create a new Batgirl. Or I will."

Cassandra Cain had been raised by her father, notorious assassin David Cain, in complete language deprivation. She was never spoken to or taught to speak or read, and as such became adept at interpreting body language, able to deduce complex thoughts and emotions from minute movements. This made her an almost unmatchable fighter, since she could predict where you would strike before you began to move, but also made her completely unable to communicate with other people. When her father had her commit her first murder (at the age of six), she read the victim's dying spasms and understood the horror of killing, and ran away. She wound up in Gotham during the "No Man's Land", when the city had been damaged by an earthquake and formally severed from support or authority of the United States government, and received tutoring and care from Oracle (Barbara Gordon), who had been the first Batgirl before she was crippled. When they learned of her history, Oracle and Batman adopted her into the Bat-Family and gave her a costume as Batgirl.

The series focused on her ongoing adventures in crimefighting, as well as her relationships with the other Bat characters, as she attempted to adjust to her new life and heal from the abuse she received as a child. It was cancelled in 2006 and briefly revived for a six-issue limited series in 2008. A young-adult graphic novel, Shadow of the Batgirl, was published in 2020.

Cassandra Cain made her movie debut in 2020's Birds of Prey as a member of the titular team, played by child actress Ella Jay Basco; however, the film character is a kid pickpocket with no hint of Cassandra's comics backstory.