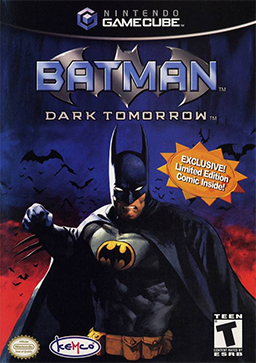 "He will try to stop you, will he not?"
"I have already anticipated his involvement."
Advertisement:

A video game developed and published by Kemco for the Gamecube in March 2003 based on the DC Comics character Batman, and ported to the Xbox by HotGen.

While working to end a gang war between Scarface and Black Mask, Batman learns that Commissioner Gordon has been abducted by The Joker and taken to Arkham Asylum. As Batman fights his way through the Asylum, he learns that one villain has a much more dire scheme afoot; a scheme that could change the world and bring about... A Dark Tomorrow...