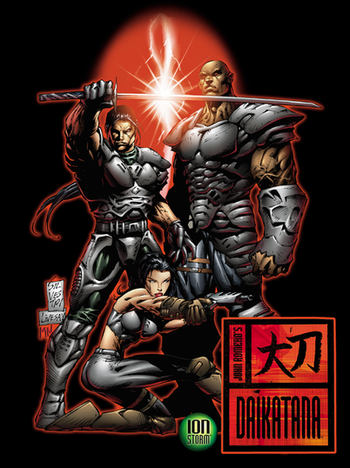 John Romero's about to make you his bitch. Suck It Down.note "Suck It Down™" is a trademark of Ion Storm Studios.
Produced by Ion Storm and running on a modified version of the Quake II engine, Daikatana is John Romero's infamous First-Person Shooter, released for the Nintendo 64 and PC in 2000. It is notable for being released several years later than planned; looking very outdated when it was released; several people publicly quitting the development team (some of which formed together and made games of their own); the ill-advised advertisement; and laughably poor AI on your required companions.
Advertisement:

In 2030 AD, a scientist named Tatsuo Ebihara discovered the cure to a global pandemic, saving countless lives and making the Ebihara family line rich enough to wallpaper multiple mansions with $50 bills. Four hundred years later, a descendant of Tatsuo, along with his aide Kage Mishima, discovered the Daikatana and, through careful study, eventually realized that it possessed the power to transport its wielder through time. Mishima promptly took the Daikatana and traveled back in time to claim the cure for the pandemic himself. In the now-changed 2455 AD, Mishima's corporation controls much of the world, using the cure as a proverbial carrot on a stick, and it is up to Hiro Miyamoto, with the aid of Mikiko Ebihara and Superfly Johnson, to follow him, take the Daikatana and Set Right What Once Went Wrong.

A Game Boy Color version of the game was also released in Europe in 2000 and Japan in 2001, though for obvious reasons it is more of a Reformulated Game than a port (featuring The Legend of Zelda-like isomeric gameplay and having heavier emphasis on roleplaying elements as a result). Said version doesn't share its bigger brother's rather infamous reputationnote the GBC version is far more polished, and is actually considered a classic on the system. The Japanese release was one of number of games exclusive to the Nintendo Power

flash cartridge service (no relation to the magazine of the same name).

There's also a famous Let's Play from 2007 for this game; you can see it here

. The game was released

on Steam and GOG.com,