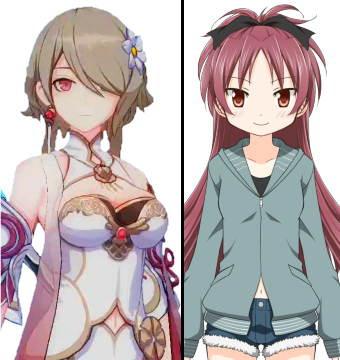 L: Rita Rossweisse. R: Kyoko Sakura.
Everyone is familiar with the fanservice power of belly exposure, but sometimes a character's design goes to the opposite end of the spectrum. In these cases, their clothes feature a small opening that only exposes the navel and a bit of belly around it, as it is just enough skin showing to draw attention without being blatantly sexy and uses their navel as a sort of target to draw the viewer's eye. This can also be a way to indicate that a character has an edgy personality and likes to show off a little bit, or has some unique decoration in that area. A character with such an outfit may also be paired with or be on a team with another character whose outfit is more midriff-baring or more conservative altogether.
Advertisement:

This usually is done either by an actual cutout in the character's outfit or a scalloped or notched hem in the character's top that combines with their pants/shorts/etc. to frame their navel. Their top may also be unfastened at the bottom so as to create the opening.

Sister Trope to Cleavage Window, which applies the same concept to a person's bosom.

Compare with Navel Outline, where a character's navel is covered but still apparent through her clothing.

Contrast Bare Your Midriff, where the midsection is largely or fully exposed. A lot of characters' costumes have belly-baring openings in them; to fit this trope, the character must be able to mostly or completely cover the area exposed with one hand.