Spoilers for Puella Magi Madoka Magica are left unmarked. You have been warned! 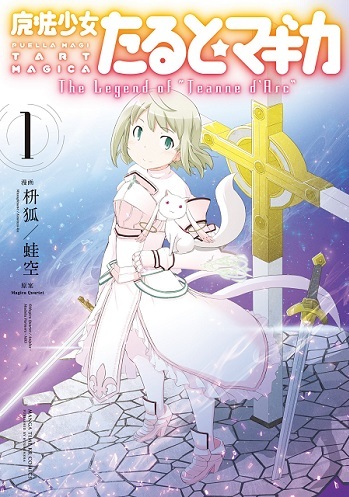 , who previously made doujins for Touhou Project as well as a Madoka Magica story entitled Homura's Revenge.
Advertisement:

Tart Magica began running in the magazine Manga Time Kirara Magica on November 8th, 2013, with trade paperback collections being released later in both Japan and the US. In America, this series is licensed by Yen Press.

Near the end of Puella Magi Madoka Magica, it was revealed that Joan of Arc was actually a magical girl. This is her story.

The year is 1425. Jeanne Tart follows a fairy and finds herself attacked by brainwashed soldiers. She is rescued by a girl with magical powers and a creature calling itself "Cube". When everything is settled, Cube asks Tart to make a contract, one that will change the history of France. The story is a Historical Fantasy, and the creators have certainly Shown Their Work, as it follows more or less the exact story of Joan of Arc, just with magical fights and some character-based humor. Several lengthy history exposes are included, explaining the historical background so that the reader knows what parts of the manga are true to life; it basically ends up being an educational manga.

Tart, Riz and Melissa would later appear in the 2017 smartphone game Magia Record, with Corbeau and Elisa being added in a later event.