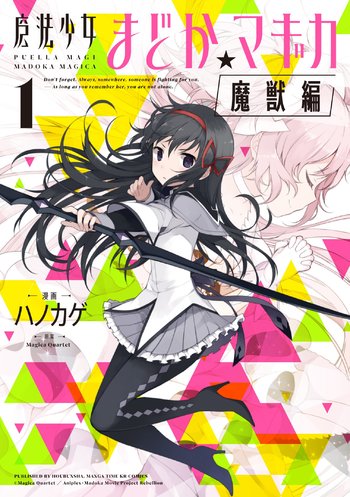 At the source of everything lies one magic... A power of the past that lost its way to complete its role... It all comes from the existence of a single shield.

After the events of the anime, Homura is left alone in the world created by Madoka's wish. Now, instead of witches, magical girls fight Wraiths, seemingly mindless creatures that attack people with high emotions. Homura goes after these creatures as is her duty as a magical girl, but when one steals a piece of her magic, she is met with a familiar face...

Late-Arrival Spoiler Warning: Puella Magi Madoka Magica is one of the most popular anime franchises. As such, there are a great deal of spoilers. Most of them are marked, while others aren't. Avoiding these pages is highly suggested for those who have not seen the series. This page assumes you have both watched the original anime and Rebellion. Proceed at your own risk.