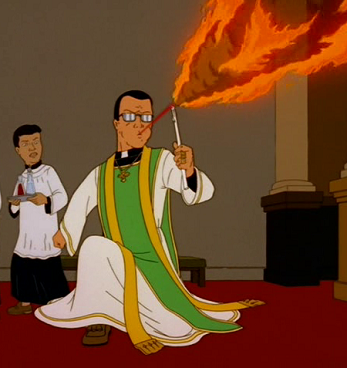 Vaya con Dios.
"You know why the measurement of alcohol content is called 'proof'? See, comes from back in the old days, when pirates wanted to test the strength of their rum. They used to pour a little bit out on gunpowder. [...] And then the gunpowder, if it burnt when they set it alight, they considered it proof that their rum was good and strong. But see, I ain't got no gunpowder on me, do I? But I'm pretty sure you boys'll make just as impressive of a sound when I set your balls on fire."
Agent Whiskey describes the reason this trope works, Kingsman: The Golden Circle
Advertisement:

A form of Improvised Weapon whereupon one fills their mouth with liquor, holds up a torch, candle, or if they're really ballsy, match or lighter, and spits the alcohol out into it, blasting out a stream of flame.

Possible in Real Life, but only with very high proof alcohol (at least 100 proof note The concept of "proof" came from the Royal Navy's method to test the purity of their rum, a 100-proof spirit means that gunpowder doused in the spirit will still catch fire and burn, or 50% ABV). Anything lower will sputter a bit, if not put out the flame. Beer and wine aren't going to do it; you'll need to use something distilled. You'll need a good strong whiskeynote or whisky, which is how Scotch whisky is spelled, and a lot of the really strong stuff is Scotch, some fierce vodka, 151-proof rum, absinthe, moonshine, or while not really what one would consider booze, PGA. That's right, pure grain alcohol — 96% ethanol. For things that aren't technically booze, there's methanol, industrial alcohol or wood spirit. Do not drink this stuff! (And for methanol and alcohol fuels based on it, don't even put it in your mouth for this stunt, the tissues of the mouth absorb!) Do not breathe it in! Do not get it on your skin! It is nasty! There is also isopropyl, commonly called rubbing alcohol or electronic alcoholnote ethyl alcohol will short your electronics because it absorbs water; isopropyl alcohol, to the contrary, is hydrophobic and completely dielectric, and is therefore the one you're supposed to use to clean your electronics. It is expensive and definitely not for drinkingnote If you do so, you'll give yourself quite a bit of digestive discomfort and may even need to have your stomach pumped if you accidentally swallow too much, but it burns nicely. Obviously, this is a hazardous stunt best left to practiced performers.

Sister Trope to Aerosol Flamethrower. A more distant cousin, with more Toilet Humour but only slightly less realistic, is Farts on Fire: the idea of harnessing a concentrated source of methane into a weapon. Another way to use booze as fuel for an impressive fireball is the Molotov Cocktail. See also Homemade Flamethrower and Bizarre Beverage Use.