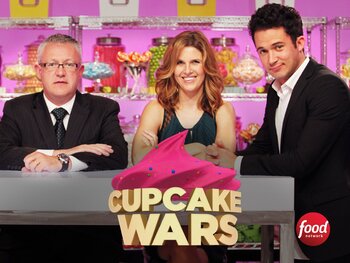 Cupcake Wars is yet another competitive Cooking Show running on Food Network (hosted by Justin Willman), taking cues from Iron Chef and Chopped. Each episode is themed around a grand celebration, with four cupcake makers fighting for the right to have their centerpiece included in the festivities, as well as a $10,000 prize. There are three rounds:
Advertisement:
Advertisement: