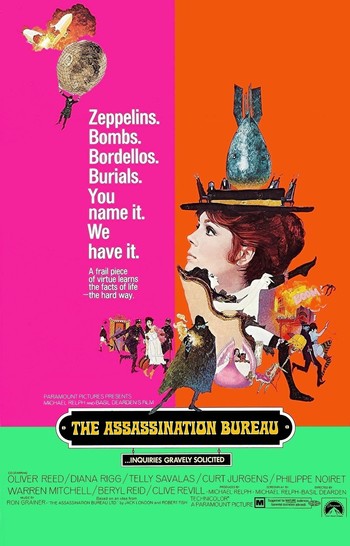 A classic British Black Comedy film from 1969, directed by Basil Dearden and adapted from the novel The Assassination Bureau, Ltd (which was started by Jack London in 1910, left unfinished, and completed by Robert L. Fish in 1963).

Oliver Reed plays Ivan Dragomiloff, the head of a Murder, Inc. gang in Edwardian London. While he is quite proud of his accomplishments, he feels that his subordinates have lost track of the high moral standard on which his father founded the association: No killing unless it can be determined that Murder Is the Best Solution. To that end, he accepts an offer from journalist Sonia Winter (Diana Rigg): If they can't kill him, he will kill them.

Of course, he also has reason to believe that his 2IC (Telly Savalas) has reasons of his own for wanting him dead.

This movie has examples of