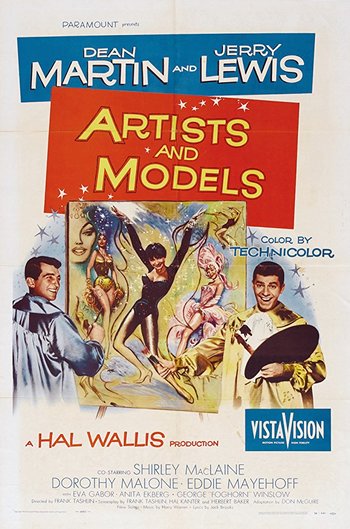 Artists and Models is a 1955 Paramount musical comedy film directed by Frank Tashlin and starring Dean Martin and Jerry Lewis in their fourteenth feature together as the comedy team Martin and Lewis. The film co-stars Shirley MacLaine and Dorothy Malone, with Eva Gabor and Anita Ekberg also appearing in brief roles.

Rick Todd (Martin) is a struggling painter and smooth-talking ladies' man. His goofy young roommate Eugene Fullstack (Lewis) is an aspiring children's author who has a passion for comic books, especially those of the mysterious and sexy "Bat Lady." Each night, Eugene has horrific screaming nightmares inspired by those comics, about a bizarre bird-like superhero called "Vincent the Vulture", which he describes aloud in his sleep. Meanwhile, a neighbor in their apartment building, Abigail Parker (Malone), is a professional artist who works for a New York comic book company and the creator of "Bat Lady." Her energetic roommate is Bessie Sparrowbush (MacLaine), her co-worker and Abigail's model for "Bat Lady." Abigail becomes frustrated at work at the increasingly lurid and bloodthirsty stories her money-hungry publisher Mr. Murdock (Eddie Mayehoff) demands, and she quits to become an anti-comics activist, dragging Eugene into her crusade as an example of how trashy comic books can warp impressionable minds, just at the same time that Rick gets a job with the company after pitching the adventures of "Vincent the Vulture" from Eugene's dreams, having to keep his work a secret from both her and Eugene.

Eugene: I can't keep this dicky down, Ricky!.
Rick: Anybody ever tell you that dickies went out with horse cars?! If you're going to rent, why don't you rent a modern dress shirt, something like about 1922.