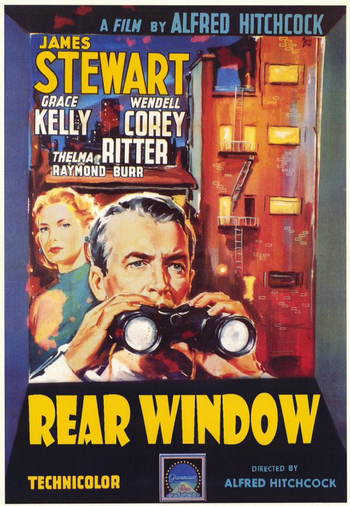 "I'm not much on rear window ethics."
—Lisa Fremont
Advertisement:

L. B. "Jeff" Jeffries (Stewart) is a photojournalist who broke his leg during a dangerous assignment. He is confined to his small Greenwich Village apartment while recuperating and, out of boredom, begins to spy on his various neighbors across the courtyard. He sees one of the neighbors, Lars Thorwald (Raymond Burr), acting suspiciously, and eventually becomes convinced that Thorwald killed his wife Anna (Irene Winston), a bedridden invalid who has gone missing. Jeff's girlfriend, Lisa Carol Fremont (Kelly), doesn't believe him at first, but soon changes her mind. After trying and failing to convince Jeff's police detective/friend Tom Doyle (Wendell Corey) of the crime, Jeff, Lisa, and Jeff's nurse Stella (Thelma Ritter) come up with a plan to catch the killer themselves.

Adapted from Cornell Woolrich's 1942 short story "It Had to Be Murder", this is widely regarded as one of Hitchcock's very best films. It was remade in 1998 as a Made-for-TV Movie starring the late Christopher Reeve, who was actually paralyzed from the neck down. The 2007 film Disturbia with Shia LaBeouf is a modern day retelling, and it's far from the only one.