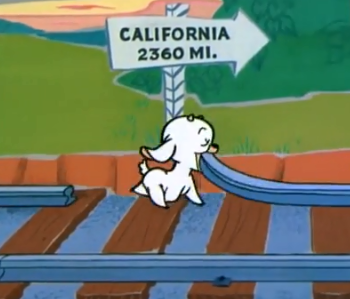 Need your railroad eaten? He's the goat-to guy.
"I would like to make a robot goat, capable of eating the Internet," he said. "It would probably be called the Intergoat. Intergoat 2.0 would be wireless."
— From an interview with Tom Siddell
Advertisement:

The general portrayal in fiction that all goats are Type 2 Extreme Omnivores, able and willing to eat anything and everything. If anyone brings a goat into a story, there's a good chance that it will eat something important that it wasn't supposed to. This is normally Played for Laughs, but can also be used in more dramatic works where the goat's hunger causes serious, long-term problems for the characters.

Depending on the situation and the level of comic exaggeration, such a goat may go from simply being willing to eat technically edible things most people or animals would never begin to find palatable to being able to consume literally anything put in front of it, chowing down on steel girders and cinderblocks as if they were hay. An Extreme Omni-Goat is usually also able to consume preposterous volumes of food, often eating hundreds or thousands of times its own weight in produce, wood and/or industrial materials without any visible discomfort or losing any of its appetite. It's also common for fantastical goat-like creatures such as Fauns and Satyrs to have similar eating habits.

In general, their Trademark Favorite "Food" is generally accepted to be tin cans, or at least anything made out of metal (unless you are in Japan, in which case it's books and anything else made out of paper). This is a commonly believed myth in real life, coming from the fact that real-life goats will chew on tin cans in order to eat the paper and glue from the labels.

Not to be confused with Omniglot.