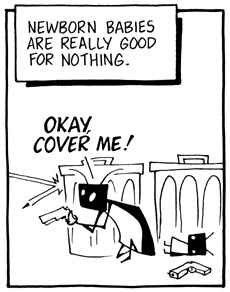 Made you laugh? That's just the first panel.

(formerly Bug or Bug Comic) is a gag-per-day humorous webcomic written by Adam Huber, started on October 19, 2009. It stars caricatures of cockroaches, using them to poke fun at a wide array of subjects, with little pattern as to what Huber will lampoon. The comics themselves rarely have a set punchline, often instead having a joke in each panel, thus providing multiple laughs per strip. (See "Pizza Delivery"

for a good example). Its general format is analogous to stand-up comedy.

Updates every Monday, Wednesday, and Friday at midnight sharp, as well as a classic-style Sunday Strip exclusively for Patreon supporters.