I Got a Rock 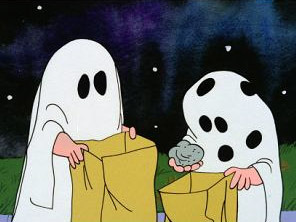 "I don't understand it. I went trick-or-treating and all I got was a bag full of rocks."
"An apple? Where's my candy, you son of a bitch?!"
— Fez, That '70s Show
Advertisement:

In Halloween Episodes, some characters go trick-or-treating. They eagerly open their candy bags and ready themselves for the candy. The adult reaches into a bowl and grabs some ... fruit? This will typically make the children mad, usually resulting in the vandalizing of said adult's house.

Also can happen from the adult's point of view. If it is in this form, the adult will desperately try to convince the children that the item is tasty and nutritious. The adult will then be truly and sincerely shocked that their house has been targeted.

Note that the "treat" does not always have to be edible, or even a likely one, like the eponymous rock.

The Trope Namer is from the Peanuts Halloween Special, It's the Great Pumpkin, Charlie Brown.

Compare My New Gift Is Lame, as well as Razor Apples, which are worse than unwanted, they're downright dangerous. Contrast Green Rocks, which are the kind of rock that may not be useless after all. The rock doesn't need to be yellow. If extended enough, may become a subtrope of Unwanted Gift Plot.