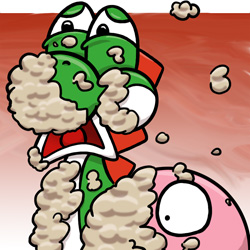 Such horrors cannot be unseen...
Advertisement:

Bytes of Life is a gag-based Webcomic starring two humans; Kakujo; his his baby daughter, Ilia; and various video game characters, mainly Nintendo's, though others, such as Sackboy from LittleBigPlanet appear on occasion. It is written and drawn by Bryan Lacie.

If you are a fan of Nintendo, real-world/game-world mashups, or video games in general, this is a web-comic you must read.