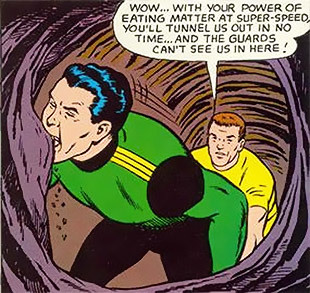 Matter-Eater Lad doing what he does best.
"If it looks good, eat it. And it all looks good to me."
— Andrew, Bizarre Foods with Andrew Zimmern
Advertisement:

The Extreme Omnivore will eat just about anything out of hunger or curiosity, so long as it looks like food. And sometimes even when it clearly doesn't. They don't fear the Lethal Chef, and you will never hear them say I Ate WHAT?!

There are two versions of this trope:

Both versions may also be open to the idea of cannibalism when the opportunity presents itself.

Please note that instances of someone being forced to eat something disgusting or inappropriate isn't Extreme Omnivorosity. Likewise for unintentional ingestion. A true Extreme Omnivore has a long-term pattern of eating everything knowingly, willingly, and usually cheerfully.

Compare Paste Eater. Horde of Alien Locusts can be an entire species of this. Extreme Omni-Goat is a subtrope where this applies to goats. A character like this is likely to be a Big Eater, though a Big Eater generally restricts themselves to things ordinarily considered food. Compare Extreme Omnisexual. Contrast Picky Eater and Unconventional Food Usage. Compare Fantastic Diet Requirement; while the Extreme Omnivore can eat almost anything, but doesn't typically require any one specific intake, someone with a Fantastic Diet Requirement needs to eat something unusual, usually a single specific thing, either exclusively or as part of their diet.

Don't Try This at Home, seriously. People have died trying to eat things not meant for human consumption. At best, you'll feel sick to your stomach. At worst, you'll die because of it.

Isabella's dog eats her Fireside sash with all her patches sewn on, right when she is to attend a ceremony later.

Isabella's dog eats her Fireside sash with all her patches sewn on, right when she is to attend a ceremony later.