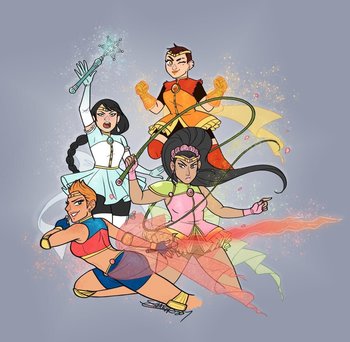 Sequinox is a Sailor Moon Tabletop RPG Actual Play, and one of several games featured on Cool Kids Table. Unlike other games on the podcast which are GMed by Alan, this game is run by Shannon Manor.

In the town of Westbrook, four girls awaken one day to discover several bizarre things around them: a strange fox appears to them before school, they find mystical phone charms when it leaves, and they can see the stars in the sky—and one constellation is missing. The four soon discover that the fox is Tellus, aka Tellie, a servant of the Earth goddess Gaea, and that they have been chosen to become Sequinox: warriors powered by the seasons to defend the Earth from the stars themselves. Stars who have also just arrived, and are intent on wiping out all life on the planet.

The four girls are:

Unfortunately for them, Tellie is a little dumb and can't remember everything that it was supposed to tell the girls. Fortunately, they have backup in the form of the enigmatic Vivaldi, whose violin enables them to unlock the true extent of their powers. Though their personalities may clash, this group is Earth's greatest chance to survive the coming assault from the Stars and their ruler, the Sky/Night Queen.

Shannon has also provided a lot of supporting artwork for the show on her twitter, divided into Arc 1

(though be warned that these all contain spoilers for Arc 1 of the show). There is also additional artwork through Shannon's Patreon

available from her store. The podcast itself can be reached through the CKTCast twitter

, and they also track the hastag #Sequinox