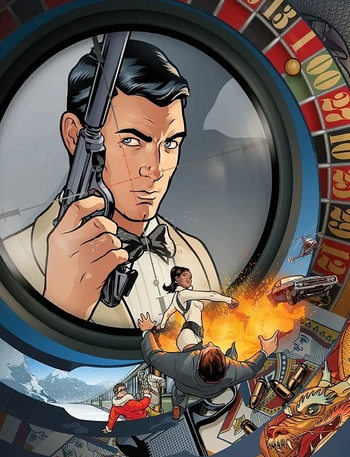 "My name is Cher. Ar Cher."
"Being a secret agent is totally awesome. I get to do one-liners and climb around in the air vent, plus, Chelsea has so much money to burn, they bought me, like, all these cool new gadgets!"
— Christian Pulisic, The Champions
Advertisement:

Everyone knows this character. He wears a tuxedo with a small bowtie, a martini in one hand (shaken, not stirred, naturally) and a pistol or revolver in the other. Announcing himself as "Surname... Forename Surname", he engages in witty Double Entendre speak with busty high society women with Euphemistic Names that leads into the bedroom (who will, more often than not, vamoose before the end of the conflict). And just in case he finds himself in a particularly hopeless situation, he'll have a gadget hidden in his cufflinks that will allow him to defeat the mooks (with a bad pun or two thrown in posthumously) and save the day. Tends to use gadgets that vary from realistic to over-the-top.

The character that should have immediately come to mind with that description is, of course, James Bond. However, while Bond has definitely popularized many of these aspects, most Shallow Parodies out there can't seem to find anything beyond the above paragraph to make fun of (They also seem to miss that Bond typically wore situation-appropriate attire during fieldwork).note The order of Martinis "Shaken Not Stirred" has occasionally been critised as giving a weaker drink (by breaking up the ice and watering down the drink). One annoyingly common mistake is for the parody character to get a gin martini instead of a vodka martini (it's a potentially legitimate concern with a gin martini, but with a vodka martini using vodka made from potatoes, the shaking gets rid of some nasty-looking oils on top. Also, gin often used to be almost fifty percent alcohol by weight, so many drink orders diluted it simply to make it more palatable. And Knowing Is Half the Battle!). It's also interesting to note that most of these tropes were NOT in the Ian Fleming books. For example, the films inverted his usual stirred-not-shaken order. Nevertheless, this is how James Bond is viewed by and large.

Contractually guaranteed to show up in everything that has to do with secret agents from ~1963 onwards. Exceptions are almost noteworthy in their own right, although there is the alternative trope of "Stale Beer flavoured" Spy Fiction.

As so many of these characters could be seen as placeholders for James Bond, this whole page could be considered his character-specific subtrope of Fountain of Expies. See also Dead Unicorn Trope.

Example of:
Dressing as the Enemy