Film / Once Upon a Spy 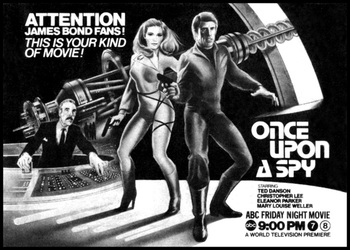 Once Upon a Spy is a 1980 Made-for-TV Movie starring Ted Danson, Mary Louise Weller, Elanor Parker, and Christopher Lee. The movie was a Failed Pilot Episode for a proposed series.

When NASA’s mega-computer is stolen, the government calls on Jack Chenault (Danson), a wisecracking computer expert, to help track it down. Partnered with Paige Tannehill (Weller), the two find out that Marcus Valorium (Lee), a mysterious and powerful multi-millionaire, is in control of the computer and plans to use it to take over the world. It is up to Jack and Paige to take down Valorium and save the day.

Tropes in Once Upon a Spy: