Literature / The 13 ½ Lives of Captain Bluebear 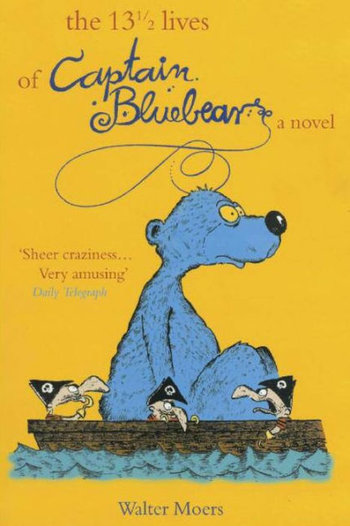 "Life is too important to be left to chance."
—Deus X. Machina
Advertisement:

The first novel by Walter Moers about the fictional continent of Zamonia, covering the live and travelings of Bluebear, a blue bear, a character in a series of children's stories written by Moers.

The book covers the first 13½ lives of Bluebear.

After starting his life by being rescued from falling into an enormous whirlpool by 4-inch-tall pirates, Bluebear travels the lands of Zamonia in search of fortune, and a place to call home. In his journeys he learns much from a multibrained genius professor, travels the Demererra Dessert, falls into a dimensional hiatus, matches wits with a superintelligent lump of rock performs on a dream organ in a giant head, meets the multitudinous races of Atlantis, helps deliver many a Deus ex Machina via sentient pterodactyl, and encounters many other weird, marvellous and wonderful (but mostly weird) threats, challenges friends and enemies.

This is a sweet, nicely illustrated and inventive picaresque story, which meanders quite a bit in the telling of the story, and focuses on the oddities of the world.

Tropes used in the book include: