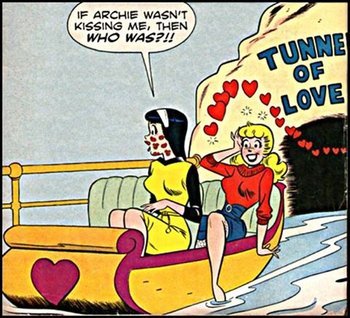 A type of boat ride commonly found in carnivals and amusement parks that is mostly geared towards couples. A major theme for the Tunnel of Love is that it features rowboats or most commonly Swan Boats for riders to sit on as they float through a dark tunnel. It would either be a relaxing romantic ride that will encourage couples to get intimate, or a spooky themed ride that will encourage couples to cling to each other. A Comedic turn of "Tunnel of Love" occurs where after emerging from the dark tunnel, a person discovers they are embracing or kissing the wrong person. A sad version can occur if a person is riding by themselves or with someone other than the person they desire.

While this type of ride is rare to find nowadays in any amusement park, it is often used in media that features characters going to a carnival or amusement park, allowing the characters romantically interested in each other a chance to get some alone time.