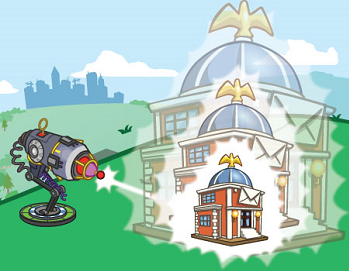 Amy: How can we be in here? How do we fit?
Rory: Miniaturisation ray.
Amy: How would you know that?
Rory: Well, there was a ray, and then we were miniaturised.
— Doctor Who, "Let's Kill Hitler"
Advertisement:

Examples in various media of a ray (a portable gun or a fixed installation) which can be used to shrink things (or, in some cases, alternately to expand things, probably by reversing the beam polarity). Has been subjected to Science Marches On and is a Discredited Trope; examples that do appear these days are more or less humorous, or else aimed at a target audience of kids.

Most (not necessarily all) such are usually typified by one or more of the following:

See also Incredible Shrinking Man (which can result from this), No Conservation of Mass, Shapeshifter Baggage.

High-tech helicopters that can quell dangerous situations by freezing or shrinking hostiles.

High-tech helicopters that can quell dangerous situations by freezing or shrinking hostiles.