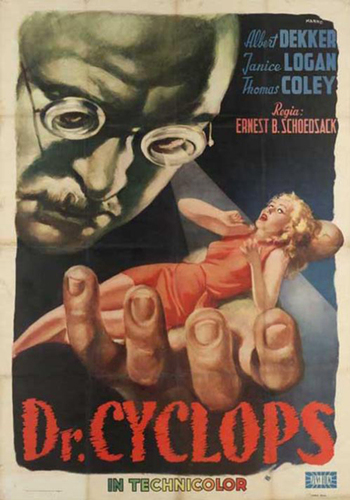 Or: The World's Scariest Optometrist!
Advertisement:

Dr. Cyclops is a 1940 Paramount science fiction film, directed by Ernest B. Schoedsack and produced by Merian C. Cooper (they of King Kong fame). The film is noted for having decent special effects for the time.

Two biologists, cranky Dr. Rupert Bulfinch and sensible Dr. Mary Robinson, and an engineer, Bill Stockton, are invited by legendary biologist Dr. Alexander Thorkel to his remote lab in Peru. They hire miner Steve Baker to take them there. They assume that they're going to be assisting Thorkel, but to their astonishment, all he asks them to do is look into a microscope for him, his eyesight being so poor he cannot do it himself. After something they see through the microscope confirms something for him, he promptly asks them to leave.

Confused and a little insulted that they travelled thousands of miles for basically nothing, the four of them refuse to go and snoop around. When Thorkel catches them, he pretends to bring them into his confidence, revealing he's been harnessing radioactivity from a nearby uranium mine to create what basically amounts to a Shrink Ray. Inviting them to look, he shrinks them, along with his Peruvian servant Pedro Caroz, who had also been present, and keeps them as test subjects. But when he discovers that they're slowly returning to ordinary size, Thorkel realizes that, once they're normal-sized again, they'll go right to the authorities, he realizes he has to kill them. After he euthanizes Bulfinch with an overdose of ether, Mary, Bill, Steve and Pedro escape into the surrounding jungle and fight to survive until they can return to normal size, while Thorkel hunts them.

For a 1970s TV kid version of the premise, there's Dr Shrinker.