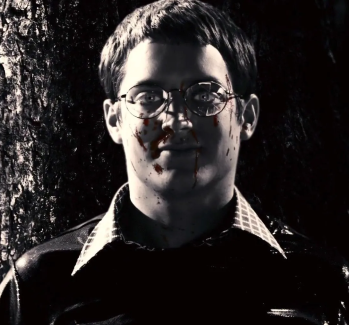 They say the eyes are the window to the soul, but as we see, he has no soul.
So you have a guy who is cold, emotionless, or brutally practical, a little cruel or even a soulless monster. To quickly tip off the audience to his personality, give him glasses. The eyes are said to be windows of the soul, so hiding them behind glasses makes the character seem more removed. They mask the spitefulness on a villain's face and usually after the facade is taken off it is seen in their eyes (often going with Creepy Shadowed Undereyes of evil). Particularly effective if the glasses have Opaque Lenses and you can have the light reflect off them in scary ways. Double bonus points if seen on the Evil Genius.
Advertisement:

Compare Sinister Shades. Contrast Stoic Spectacles, where the glasses make the guy look aloof, intellectual and cute. Since glasses also evoke physical weakness, this often also evokes Sissy Villain. On the other hand, since Smart People Wear Glasses, it can also signal that the character is a Badass Bookworm or Wicked Cultured. It may also be a parallel to Evil Cripple, in which a physical defect (poor eyesight, in this case) reflects a moral one. When this is treated as a fetish, see Kichiku Megane.