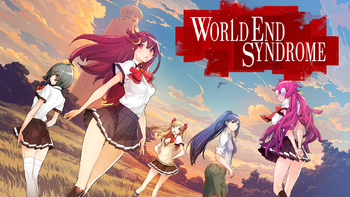 I wish this world would end...
Advertisement:

When you move from a big city to your uncle's mansion in a seaside town called "Mihate", you hope to start a new life. But then you meet five mysterious girls and start to notice strange incidents occurring. Depending on how you spend the summer with your new friends, the world will significantly change...

World End Syndrome, developed by Toybox Games and published by Arc System Works (best known for the Guilty Gear series), is a Slice of Life Horror Mystery visual novel that follows a high school student trying to escape his troubled past. As you navigate your new life at a new school with a colorful cast of new friends, a student at Mihate High suddenly dies. The murder sends shockwaves through the idyllic town as you investigate the Urban Legend of the "Yomibito", an event occurring every 100 years where corpses rise from the dead and rampage across the land. During the summer, you find yourself caught in a string of strange incidents, romance, and unforgettable summer experiences...

World End Syndrome was released on the Nintendo Switch and PlayStation 4 across 2018 and 2019. A sequel, World End Phenomenon, has been announced, though no details have been revealed as of 2021.