This article assumes you have knowledge of Ciel nosurge and will have unmarked spoilers for that game. 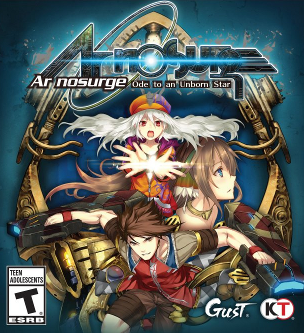 Ar nosurge: Ode to an Unborn Star is a 2014 role-playing game for the PlayStation 3, and the sequel to Gust Corporation's 2012 game, Ciel nosurge. These two games form the Surge Concerto series, a distant prequel to Gust's Ar tonelico games. Together, the two series make up the EXA_PICO universe.

Thousands of years after Ra Ciela's destruction, its people are still struggling to survive on the Migratory Starship Soreil. They have lost the ability to use Song Magic, and must face the attacks of hostile beings known as Sharl. The people of Orei, a place within Soreil, have been split into two factions due to the conflict: the Genomirai Church seeks to coexist with the Sharl, while the people of the city of Felion believe that destroying the Sharl is the way to peace. The key to resolution may lie with the Ancients, people who were alive during Ra Ciela's last days and can still make use of Song Magic's power.

Ar nosurge's initial Japan release was followed by a September 2014 release in North America and Europe. An Updated Re-release for the Playstation Vita was released for Japan October of that year and on July 2, 2015 for the US.