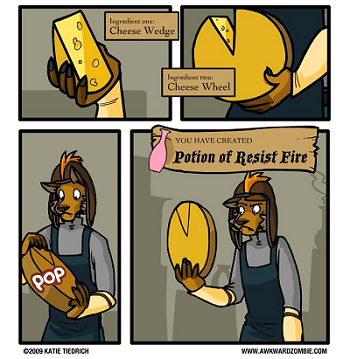 In a video game with an Item Crafting system, everything that can be created can be made by two items combined in a relatively simple fashion. No matter how complicated something is to make, sticking the right two pieces of Shop Fodder into an oven will produce it. Need a BFG? Just glue a tiny hammer to a hollow tube, and you're ready to go! Forget your Love Interest's birthday? Pop an egg and a bag of sugar (still in bag, mind you) into the oven, and you'll have a delicious and moist cake!

Occasionally, advanced items will require multiple iterations, but even in this case, every step in the process requires sticking two items together, and usually the intermediate steps produce items that are usable in their own right.

Similarly, chemists and potion makers can create any liquid or potion by mixing two liquids in kept test tubes. There may be a chance (depending on the game) of getting a small explosion instead, which can have any effect from simply coating the face with a harmless dark, dusty substance, to changing the potion maker into an animal.

This may or may not be an Acceptable Break from Reality (depending on how far they stretch it). After all, players might not appreciate the time and effort that might go into crafting basic items; something as small and simple as making a wooden chair from raw wood would demand cutting down the logs into planks, measuring and cutting the planks into appropriate sizes, drilling holes for nails to fit in, inserting each nail manually, etc.

Compare MacGyvering. Not to be confused with Instant A.I.: Just Add Water!.

Smoothie-making in Ring Fit Adventure is as simple as tossing the ingredients into Ring and squeezing the smoothie into a glass.

Smoothie-making in Ring Fit Adventure is as simple as tossing the ingredients into Ring and squeezing the smoothie into a glass.