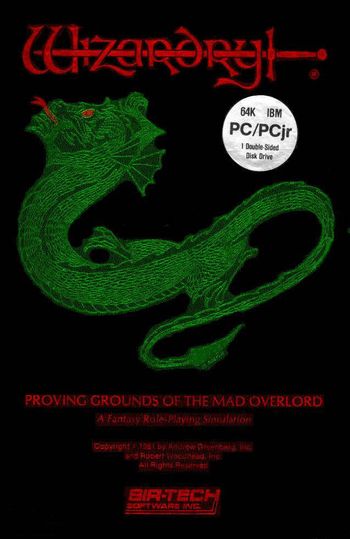 Sir-Tech's Wizardry was one of the very first computer RPGs, and alongside Ultima, was the Trope Maker for the entire genre of Role-Playing Video Games. It was a hit in the early 1980s and spawned a trilogy, an infamously hard (and decidedly different) fourth title, a fifth that returned to the style of the original trilogy, and a final trilogy of Science Fantasy games. They are:

The titles, up to Wiz V (excluding Wiz IV), were immensely influential, and countless tropes established there are still common today. The remaining three games did away with the old engine, spell system and story, added a mix of sci-fi and insane gods to it, but retained the sense of wry humour, resulting in something with a different feel, but really enjoyable nevertheless.

The first three games are very hard. The Big Bad can deal 100 damage to your party with one spell, and your Squishy Wizard characters rarely get more than 60hp, so he can kill half your party in the first round of combat and the other half in the next. Random high level encounters can be similarly deadly. For instance, ninjas can kill party members instantly with a critical hit. Resurrection spells don't always work, and come with a stat penalty when they do. Your mages have a limited supply of spells, especially early on, which can only be restored by returning to town at the top of the dungeon. Status Effects are crippling and often deadly if you don't have the magic to cure them. The dungeons are confusing non-euclidean mazes with dark zones, antimagic zones, spinners, teleporters, and generally defy efforts to map out. And your characters can die of old age.

Wizardry IV is in an entirely separate class from the other games. You play as the villain, and the rules are turned upside down, as you now must rely on summoned monsters to escort you *up* through the dungeon, while being constantly assaulted by powerful parties of heroes. The evil wizard Werdna is your only character, and you only level up at 9 specific plot points throughout the game. Your only allies are the monsters you summon, who cannot be directly controlled, never level up, and are gone forever when killed in battle. As a mage, Werdna has little HP, so if you run out of monsters, one hit can kill him. (Fortunately, you can summon replacement monsters for free at any pentagram, so your mini-horde of monsters essentially doubles as your HP.)

The series is Big In Japan, and over 20 licensed sequels and remakes were produced by Japanese developers, most of them suffering No Export for You, Wizardry: Labyrinth of Lost Souls and Wizardry: Tale of the Forsaken Land are the exceptions. Dragon Quest writer Yuji Horii states Wizardry was a big inspiration, and one of his earlier games The Portopia Serial Murder Case had a direct shoutout in a maze section. There's even an Anime OAV based on the first game although it's somewhat dated.

This love of Wizardry-style dungeon crawlers has also directly spawned several Japanese-made Spiritual Successors, the staffs of whom thought that the licensed sequels were maybe not quite capturing the atmosphere right or wanted to try to put their own spin on the concept; Shin Megami Tensei (which mines heavily from Wiz IV in particular), Etrian Odyssey and 7th Dragon are the most notable examples that have since had influence on the genre and industry in their own right. Meanwhile, in the West, David W. Bradley, who directed Wizardry V through VII, made Wizards & Warriors which furthers the developments he had made to the Dark Savant trilogy so far and is considered something of an alternative Wizardry 8 by some fans.

Many of the developers and localizers of the original Wizardry ports in Japan continued to make Wizardry games with the original publisher's blessing, as such the series is notable for having survived the original publisher's collapse in Japan by teams just continuing to put out new, semi-official, games in the series. These semi-official Spiritual Successors are known as "Wizardry Descendants" in Japan, and usually retain the same gameplay elements, races (although names are often changed), and classes.

ASCII, who ported and localized most of the original games, created Wizardry Gaiden, and later a series of mobile games under the short lived Netherdomain banner.

Starfish released Wizardry Empire and Wizardry Asterisk and, shortly afterwards, moved this work into the Elminage series. Elminage continued the same gothic art style of the original Wizardry games while absorbing the "beast" races from Asterisk and Empirenote Were-Beast, Dragonnewt, Fairy, and Devilkin, as well as three additional classes from Empire, Asterisk, and Wizardry: Summoner: Brawler, a hand to hand melee specialist, Alchemist, a combination crafting and spellcaster class, and Summoner, a spellcaster that focuses on taming and summoning monsters. These expanded mechanics would be re-used in other Wizardy descendants such as Class of Heroes and Wizardry Xth.

Another team of developers from Michaelsoft went on to found "Team Muramasa," which would eventually become the company Experience, Inc. Experience would go on to do an enhanced remake of Wizardry Xth called Generation Xth, which removed the school aspects for more science fiction; these would get yet another enhanced remake as Operation Abyss and Operation Babel. Experience would then go on to use the same formula and engine to make Students of the Round, Stranger of Sword City, and Demon Gaze.

Additionally, while not actually based on that installment, many of the people who worked on the Japanese localization of Wizardry 8 went on to make The Dark Spire.

A Massively Multiplayer Online Role-Playing Game, Wizardry Online, was released in January 30th, 2013. Notable for being the first MMO with permadeath as a central concept, the game was developed by Gamepot, and have flat out stated they're mostly working on adding multiplayer to the existing games, with a stated goal of recapturing the early, lawless days of Everquest and Ultima Online — open PVP was also confirmed. However, the game shut down its servers on January 2014, resulting in a rather short-lived MMO.

Wizardry Online was part of an intentional attempt by several Japanese companies to perform a Reconstruction of Wizardry as a whole in 2009, called the Wizardry Renaissance, it was an attempt to define specific tropes and quality assurance levels for games with the Wizardry title. More than 11 games were released during this effort, including Wizardry: Labyrinth of Lost Souls, and WizRogue. The latest game release being the PC re-release of Wizardry: Labyrinth of Lost Souls in 2020.

The Dark Savant Trilogy (composed of Wizardry 6, 7 and 8), can be purchased on Steam and GOG.com.

The OAV provides examples of: