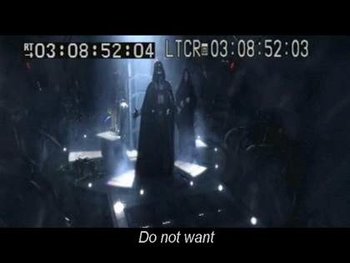 When something is translated to another language, and then translated back to its native language (sometimes with further translations in between).

There is, actally, a legitimate use of this function if one is doing a translation (to a language they don't know) using software, to see if the meaning is the same when translated back. If it is the same or reasonably similar, then one can have a high degree of confidence the translation is correct. Sometimes it is done either by using multiple translators, like Google Translate and Bing Translate, or have each translate back the other's original translation. Sometimes the differences between the two translations can be stunning, and the results can range from amazing (for perfectly correct) to hilarious (for really bad ones.)

Even when this isn't a "Blind Idiot" Translation, it will still (often) lose something when translated back. Or maybe gain something.

This often happens with bootleg movies from other countries (although it's a mystery why they didn't just use the original language track). A big cause of Translation Train Wreck.

Free online computer translators do this a lot, especially Babelfish, which quickly went memetic for its ability to produce hilariously mangled results in this manner. Amplified by the fact that even a one-way machine translation will invariably produce stilted grammar and have difficulty with homonyms.

This can also happen with running phrases through an automated translator and back again, which is a popular internet game, and a way to invoke Intentional Engrish for Funny. See Translate the Loanwords, Too for when this happens because a translated work includes foreign words.

Compare Either "World Domination", or Something About Bananas, which is translating something to your own language and coming up with two possible results: one which makes sense and one which doesn't.

Want some fun trying this out? For a single language, there's this site