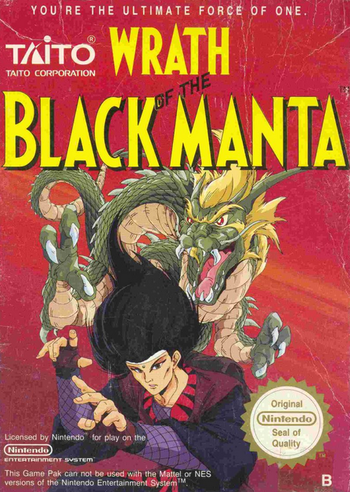 Wrath of the Black Manta is a side-scrolling action title for the Nintendo Entertainment System, published by Taito. It was released in North America in 1990, getting a PAL release in 1991.

A localization of the 1989 Family Computer title Ninja Cop Saizou by Kyugo, the crux of the story deals with the main character rescuing children kidnapped by a gang. One of the missing children is Taro, the young student of the main character's master. He will leave hints regarding hidden areas and how to deal with bosses.

As stages are cleared, you learn Ninja Arts, which must be charged up to use.

Something of note is that between the games, there were a noticeable number of differences.