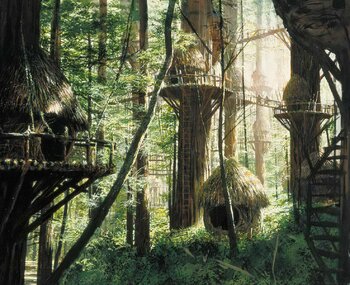 A village built, as the name suggests, entirely out of treehouses. Rope bridges typically connect the structures to one another, and ladders are typically used to access the community from ground level. Dangling creepers may also be used for transport.

A common form of Bamboo Technology, although more magical versions can be seen as well. This can often be found within the Enchanted Forest and the Hungry Jungle.

Wood elves are frequent inhabitants of such a place, and it has become an often-used version of the Hidden Elf Village. Often, undying or otherwise long-lived elves may outlive the trees and have to relocate every few decades or centuries. In other cases, winged creatures such as Bird People may make their homes among the boughs — the gaps between trees aren't a significant issue if you can fly, after all. Monkeys, monkey-people and similar arboreal beings are also likely to be found in towns like these.

Natives of these settlements may be isolationists seeking to avoid the attention of other people by raising their cities above where they could be stumbled into and hiding them within the canopy. In other cases, these may be built in areas where staying on the forest floor is dangerous, such as in wildernesses teeming with predators.

In some cases, such as when the town's builders are very small or the trees very large, an entire city may be built within the branches of a single tree.

Compare Treehouse of Fun and Arboreal Abode. Tree Trunk Tour is the sister trope that takes place in the trees instead of on them. For a more extreme variant, where entire civilizations can exist purely within tree canopies, see Treetop World. For the logical extreme, see World Tree.