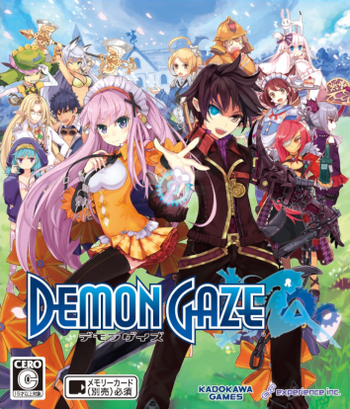 Demon Gaze is a RPG/Dungeon Crawler for the PlayStation Vita created by Kadokawa Games. It was first released in Japan in 2013, and later in America in 2014.
Advertisement:

In this game, you take the control of a young man (Default name: Oz) who arrived, without knowing, in the Dragon Princess Inn, a lair for mercenaries at the outskirts of the ruined Castle Grimodar. Oz has the power of the Demon Gazer: a being who can capture and control demons by gazing at them. Seeing this as an opportunity to protect the inn (and make some more money in the process), the manager, Fran Pendoll, decides to send Oz into the six realms surrounding the castle to defeat demons who occupy those regions.

The gameplay is quite identical to the Etrian Odyssey series. You create a party of five characters (including the protagonist) as you travel into a labyrinth to find and defeat the resident demon(s). This is done by searching out and capturing all the "Demon Circles" scattered across the labyrinth. Once all circles have been sealed, a demon will appear, who you must then defeat. After winning the fight, the demon will be sealed away by your Demon Gazer power, and then turned into a key back at the inn, which you can use to summon it as an ally in battle.

In addition, the game allows you to customize your party with Artifacts which give them different set of abilities that they might not be able to acquire themselves, as well as changing their appearances in the bath area at the inn. And finally, you can interact with NPCs both before and after sidequests to improve your relationship with them.