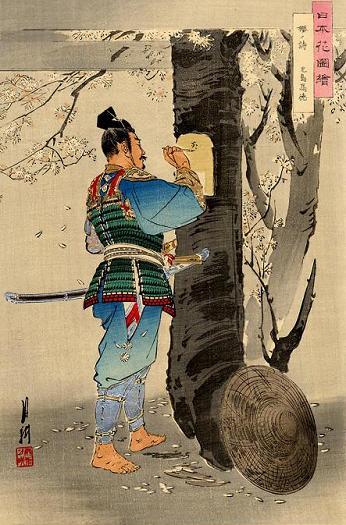 Samurai Writing a Poem on a Flowering Cherry Tree Trunk
Print by Ogata Gekko.
The minstrel boy to the war has gone,
In the ranks of death you'll find him;
His father's sword he hath girded on,
And his wild harp slung behind him.
— Thomas Moore, "The Minstrel Boy"
Advertisement:

Modern Western culture often tends to stereotype Warriors and Poets as belonging to distinct, different, and opposing groups (Elves Versus Dwarves + Sensitive Guy and Manly Man). Warriors are manly men who like hitting each other and other simple pleasures. Poets are culturally refined wimps.

Traditionally though, poetry and war are complementary pursuits. Poems sing of the glory found in battle. Honor and virtue are on display when men are facing deadly peril. Experiencing death and the horrors of war make a man contemplate the big questions of life. Often the war is being fought for some greater purpose or cause, such as liberty. Great generals devote their spare time to philosophy, wondering what it all means. Poetry (except free verse) is built on the optimal deployment of limited resources — words that fit together with other words, and with words that aren't there — not unlike the strategic decisions a soldier makes on the battlefield.

Note that this isn't only about poetry. This trope is about literature, music, writing epic sagas, philosophy... any sufficiently refined way of expression combined with warfare, fighting, or any kind of physical combat.

Thus singers, poets, and writers have gone off and joined the armed forces, looking for that glory and enlightenment. They are often welcomed by the other warriors who want someone who can express their feelings and experiences in poetry or song. Often because they themselves feel those things too deeply to be able to express them bluntly in plain words (unless they are drunk).

That's where this character comes in. He's fought in battle and is no slouch at war-making, but he thinks about the purpose behind all the bloodshed and philosophizes on the meaning of life and death. Since War Is Hell he tends to have a bit of a melancholy tone about it all. Perhaps his poems long for peace as only a man who has seen war can. However, since War Is Glorious he might write songs glorifying the battle he just witnessed. If he is a supporting character, expect other warriors in his Band of Brothers to be moved by his poetry and philosophical insights when he shares them.

If he's the lead, he might be a loner with his fellows being unable to understand his way of thinking. It might also be a way of showing his Love Interest that he's not just a bloodthirsty barbarian but actually a sensitive soul who is forced to do horrible things because of war or human nature (as he understands it).

Note: Do not mistake this for Cultured Badass. That trope is about a badass with "cultured" hobbies; this trope is about a mindset rather than hobbies. Essentially, a Cultured Badass can appreciate love poetry, but a Warrior-Poet will incorporate that poetry into their daily life and their thoughts about warfare. Additionally, a Cultured Badass can enjoy battle for the thrill and pleasure, but a Warrior-Poet will espouse something more mystical and/or spiritual from the fighting. Basically, just because you can write poetry doesn't mean you are a poet.

The Cyclops is introduced reciting poetry while overlooking his minions as they toil away.

The Cyclops is introduced reciting poetry while overlooking his minions as they toil away.