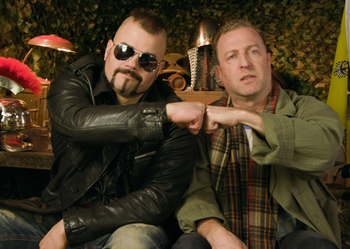 "I'm Indy Neidell."
"And I'm Joakim/Pär from Sabaton."note For "Swedish Pagans" it was Tommy Johansson instead.
"And this is Sabaton History."
Advertisement:

Sabaton frontman Joakim Brodén and bassist Pär Sundström had previously appeared on episodes of Indy Neidell and TimeGhost's other channels to discuss the history behind the band's many songs about the world wars. Beginning in January 2019, the band started a collaboration with TimeGhost to produce a weekly series of videos focused on their music and the history behind it. Each video starts with a play-by-play of a given song's topic, followed by a "producer segment" delving into the writing process for the song and and trivia about it. In 2020 they began branching out into related topics, such as the role of disease in warfare and the effects that the Battle of Verdun had on later French military doctrine.

also offers the chance to earn autographed special editions of the band's albums (beginning with 2019's The Great War), with Indy narrating a short introduction to each song.

The channel ended its original weekly schedule with episode 101 in January 2021 due to running out of songs, but confirmed they would still be updating less often. In June 2021 they debuted a new filming set in Sabaton's recording studio in Falun, Sweden.