Web Video / What We Had to Watch 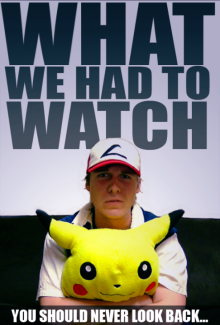 What We Had to Watch is a video review series written by and starring Garrett Snook, aka Il Neige (formerly DJ Il Neige), who reviews mediocre movies of the last 10-20 years, generally movies kids of the 00’s would have grown up with, as opposed to the Internet’s usual fixation on nostalgic 80’s and 90’s media. Citing influences from various current and former contributors of Channel Awesome, Il Neige takes them down with a good sense of humor and dry commentary along the way. You can also watch his work on Geekvision and The Agony Booth.

His YouTube page, containing mirror uploads of many of his older reviews, as well as a few Vlog videos, can be found here

. He was added as a producer to Channel Awesome during their talent search in 2014, then left the site in April 2018. He has also set up his own Vidme account

Though he didn't upload a proper review in a few years for the series, Neige official ended the series in mid-2019, announcing he was just going to focus on his music parodies.