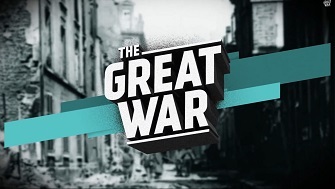 is a Youtube channel, which follows World War I week by week, exactly one hundred years after the events depicted, as an ambitious four year project. In between the main episodes, the series looks at special topics like famous personalities, innovations, the role different countries played, and other things, as well as answering questions from viewers. It is presented in English by Stockholm-based American actor Indy Neidell, who is also the lead writer. Polish and German language versions were launched but discontinued due to lack of funding. The narration is illustrated with contemporary photographs and original footage courtesy of British Pathé.

The channel has five series so far:

Has a sister channel called It's History

, which looks at a wider range of topics, such as the Cold War, China, and the history of sex.

A sequel of sorts for The Great War that covers World War II started on September 1st, 2018 and their channel is going by the name World War II. Despite the "end of the war" in November 2018, the crew (sans-Indy) have elected to keep going in a new format of lengthier, more in-depth episodes with new host Jesse Alexander, which covers the aftermath of the war (and specifically, a few of the wars that sprang up in the immediate aftermath of the main conflict and are often argued to be continuations of the Great War). Indy also co-hosts the Sabaton History channel with Joakim Brodén and Pär Sundström of Sabaton, which tells the history behind Sabaton's songs (some of which he's covered on The Great War or World War II). In 2019, the Great War team, Real Time History, announced they were crowdfunding a new documentary titled 16 Days in Berlin chronicling the Battle of Berlin in the final stages of World War II in Europe day by day, in collaboration with other historical youtubers and museums.