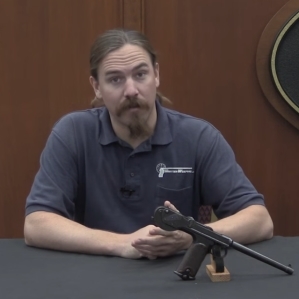 Ian, with a C93 Borchardt pistol.
"Hi, guys. Thanks for tuning in to another video on Forgotten Weapons dot-com. I'm Ian, and today we're taking a look at..."
Advertisement:

Forgotten Weapons is a blog

started in 2011 by firearms enthusiast Ian McCollum. The show focuses on rare and forgotten firearms throughout history, how they function, and the context surrounding their design. Initially, the site mostly featured text posts with the occasional video supplement, but as the popularity grew, the YouTube channel has become the main focus. Most videos follow a similar format with Ian sitting behind a table with the firearm of the day where he discusses the weapon's history and context before bringing the camera in closer to show the viewers how the weapon functions and comes apart. Occasionally, the weapon owners allow Ian to take the weapon out on the range for a live fire demonstration.

but the time that Forgotten Weapons took up meant that eventually he stepped back and the channel is entirely run by Karl now with only occasional guest appearances by Ian.

Now let's bring the camera in closer and look at some tropes!