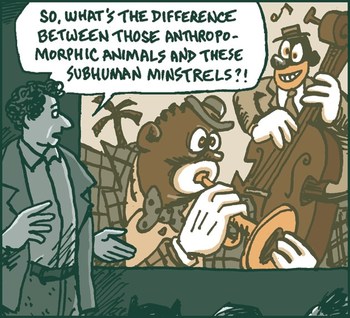 "Breakdowns: Portrait of an Artist as a Young %@?*!", by Art Spiegelman
"Falm... my friend... I would have you understand. I know now, as I look down at what I have wrought here, that were I to think upon what I have done... what I have truly done... I would be struck mad. A deed such as this... the anguish would overwhelm, destroy me. So, First Officer Falm, it must be that there are no innocents in Agarheim... no mothers, no children, no people. Only traitors. Vile, cunning traitors, who deserve no less than the full brunt of our most Holy King's wrath. Do you understand this?"
— Admiral, Planescape: Torment
Advertisement:

Dehumanization is the denial of someone's status as "human" or "person", whether by assimilating them to animals or things, especially of the harmful and disgusting sort, for the purpose of thus denying them the rights and the sympathy that come with "true personhood", and deliberately ignoring the target's individuality (i.e., the creative and interesting aspects of his or her personality).

Dehumanization may be carried out by a social institution (such as a state, school, or family) or via an individual's sentiments and actions. Dehumanization can be unintentional, especially on the part of individuals, as with some types of de facto racism.

State-organized dehumanization has historically been directed against perceived racial, ethnic, national, or religious minority groups. Other minoritized and marginalized individuals and groups (based on sexuality, gender, (dis)ability, class, or some other organizing principle) are also susceptible to various forms of dehumanization.

The concept of dehumanization is related to infrahumanization (i.e. calling someone "sub-human"), delegitimization, moral exclusion and objectification. Dehumanization occurs across several domains, is facilitated by status, power, and social connection, and results in behaviors like exclusion, violence, and support for violence against others. Will often lead to a Guilt-Free Extermination War.

Related is the practices of stereotyping, which is basically assigning certain traits to certain group of people. It may overlap with dehumanization in some cases, but just as often it doesn't.

A form of Lack of Empathy; in fact, the whole point of dehumanizing someone is to deem the one in question "not deserving any empathy". Compare and contrast Death of Personality (rendering someone as "dead" by making them lose their humanity).

In real life, averting this is a very important tactic for people in a hostage situation or prisoners of war. Enforcing that you are human with loved ones, likes, and interests will make it more difficult for captors to torture, mistreat, or kill and make it more likely for them to treat you better.