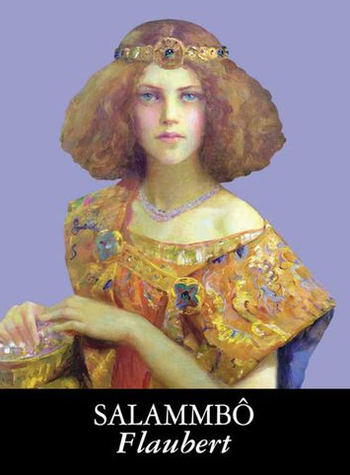 The second novel by Gustave Flaubert, author of the infamous Madame Bovary. Rarely, if ever, have two successive novels by the same author been so different.
Advertisement:

Whereas Madame Bovary charted the agonisingly mediocre tragedy of a bored housewife and her hapless husband in early 19th-century France, Salammbo is a richly exotic war epic set in ancient Carthage. The scale is vast, the imagery opulent and intense, and the battle scenes brutal enough to make Leonidas and his boys look like... well... a bunch of fairies.

After an exhausting war with Rome, the city of Carthage finds itself incapable of paying its vast mercenary army. Increasingly desperate attempts to fob them off spark a full-on rebellion, and eventually a destructive total war between the powerful but self-destructively disorganised mercenaries and a Carthage at but a shadow of its former strength.

In the midst of all this, the mercenary leader Matho falls obsessively in love with the beautiful Salammbo, daughter of Carthage's most fearsome general. His maniacal desire for her drives him to unprecedented lengths to obtain her, unleashing a conflict like no other upon the Carthaginian empire.

While just as popular as Flaubert's works in most of the world, Salammbo has never really caught on in the Anglosphere. (In fact, the only exposure most Americans have had to the name is through the film Citizen Kane - an opera based on the book is the one Kane's wife badly performs during the course of the movie.)

This novel has been adapted into multiple plays and films. In 2003, it was also adapted into a Point-and-Click adventure game, named Salammbo Battle For Carthage.