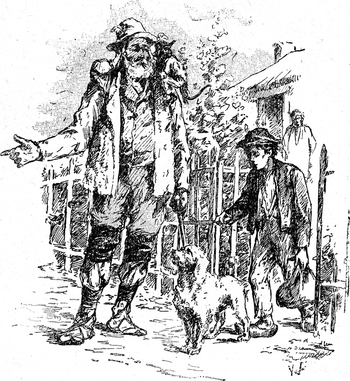 Sans Famille (Translation: Without Family) is an 1878 French novel by Hector Malot. It has been released in English (as Nobody's Boy and more recently Alone in the World) as well as many other languages, and has been adapted for film, television and theater multiple times.

The story revolves around a young boy named Rémi, who at age 8 finds out he is actually adopted. Shortly after, he is sold to a travelling musician named Vitalis by his grumpy step dad, which is the start of a long series of adventures. Along the way, Remi makes new friends, but also loses several people close to him, and slowly learns more about his past.

Among many adaptations, the best known is probably the 1977-1978 anime Ie Naki Ko (Nobody's Boy: Remi) by TMS Entertainment, Madhouse and Osamu Dezaki. There is also another anime from the 1990's, also titled Ie Naki Ko Remi, and a 2018 French film, Rémi sans Famille, starring Daniel Auteuil and Virginie Ledoyen.