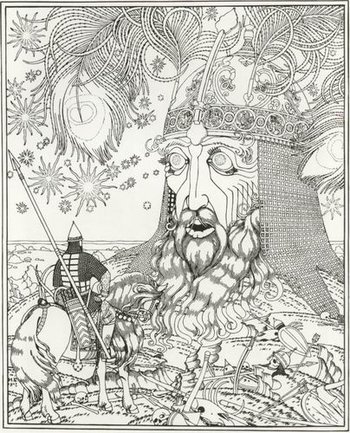 Ruslan and Ludmila is an epic poem by Alexander Pushkin, first published in 1820 when the author was only twenty years old.

It started as an Affectionate Parody of Vasily Zhukovsky's The Twelve Sleeping Maidens but ended up overshadowing it. Though the initial reception was pretty mixed and Pushkin himself was later critical of the poem, it has aged well, getting adapted to the stage and screen, and the prologue is considered one of Pushkin's most iconic works.

The overall plot of the poem is fairly simple: Ludmila, the daughter of Prince Vladimir of Kiev, is kidnapped on her wedding night by the evil wizard Chernomor, and her beloved bridegroom Ruslan sets off to rescue her. However, there is quite a lot of subplots, particularly since Ludmila has three more suitors who jump at a chance to rescue and win her after all.

The poem features the following tropes: