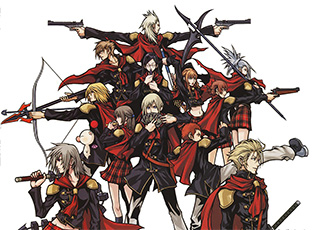 In certain kinds of stories, you want characters to have weapons. It's important: They need weapons to fight, their choice of weapon may reflect their personality, and it makes them look cooler.

The problem comes when you give The Hero a rapier, The Lancer a scimitar and The Big Guy a broadsword.

In real history, the development of swords, in particular, meant that each kind of sword had different uses. Arming swords and katanas, for instance, were primarily used for unarmoured civilian combat or as sidearms on the battlefield, generally not as primary battlefield weapons. Cavalry sabres (longer than the version used by infantry officers) were used by mounted troops against infantry and cavalry. Rapiers and small swords became popular as both civilian self-defense and dueling weapons, and were rarely seen on the battlefield at all. Some swords, such as the estoc and various late medieval longswords had narrow points designed for exploiting gaps in plate armour and thereby defeating fully armoured opponents, who were generally immune to simple cuts with a blade. Firearms and armor co-existed for a while (approximately three centuries), but eventually, firearms made metal armor obsolete (with some exceptions) until the first practical bulletproof vests were created in the early 20th century.

In fiction, however, that goes right out the window. It's almost a given that both combatants will be unarmored or lacking the most vital parts of their panoply. A character in battle with a heavily armored combatant won't use a mace, warhammer or poleaxe to break the armor or cause indirect trauma or even use a straight sword to stab him between armor plates; the fighter without armor will probably dispatch the armored fighter with straightforward slashes with the edge of the blade, with the armor having zero effect on fighting technique. And of course, a Medieval European Fantasy might have the odd Katana show up in the hands of a really cool warrior.

A kind of Anachronism Stew. Justified by Rule of Cool. Some may try to Hand Wave it by having the weapons be more representative of a culture or nation rather than personality type, despite the clear impracticality of such a thing. Not to be confused with Swiss Army Weapon, which includes everything but the kitchen sink.