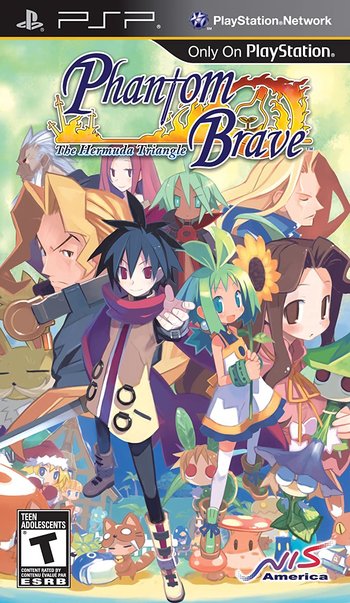 "You'll go no further! For her sake, I will not fail!"
— Ash
Advertisement:

A 2004 Strategy RPG game from Nippon Ichi, creators of Disgaea and La Pucelle for the PlayStation 2. It was the first game to be localized in North America by the company's American branch.

When Marona was a child, her parents and their employee Ash were killed by demons. In desperation they used their magic and a plea to God to turn Ash into a Phantom, a type of ghost caught between Life and Death, to protect Marona as she grew up. Like her parents, Marona is a Chroma; she is able to summon the spirits of the dead and give them temporary physical forms by possessing inanimate objects. For this, the people in Marona's world think of her as The Possessed One who can kill them all, so naturally they go out of their way to insult and belittle her.

Game mechanics aside, Marona's a rather sweet girl who loves everyone, and who seems cheerfully uncomprehending of the fear she provokes in others. Which means her neighbors have someone to protect them from the dark forces that killed her parents.

In 2009, it received an Updated Re-release for the Wii, subtitled We Meet Again, with a new chapter called "Another Marona", some new characters and a bonus art disc in a Collector's Edition. PlayStation Portable also received a re-release in 2011, subtitled The Hermuda Triangle. Lastly, it was released as "Phantom Brave PC" on Steam in July 2016. There was also an MMORPG spin-off, Phantom Brave Online. In 2021, it will receive a remaster of The Hermuda Triangle, put together alongside Soul Nomad & the World Eaters, as part of the Prinny Presents NIS Classics (Volume 1).

We Meet Again and The Hermuda Triangle has examples of: